Free Shipping On Orders Over $49 Cloth Diapers - How To View all our new products!

Referrals
Give your friends a reward and claim your own when they make a purchase.

With more ways to unlock exciting perks, this is your all access pass to exclusive rewards.

Learn More About Earning While You Shop

When children begin to crawl, they are ready to climb! Climbing is 100% natural and something humans are designed to do, even before we begin walking. Little Climber allows for your child's hands and feet to be active at all times, which makes the experience more organic. Children will know to explore from day one.

This was bought for our daughter's first birthday. And honestly, i was a little worried she might never use it, BUT then some other children played on it during a playdate and she has been non stop on it since then. She is now 16 months and really doesn't climb the rungs, but she loves climbing up and down the slide portion. She claps and smiles when sliding down. We even use cars to race down the ramp. It is sturdy and has always felt like a safe structure for independent play. It definitely was a worthwhile piece in our space. 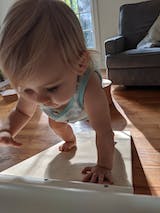 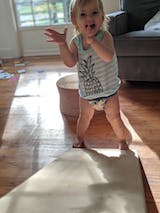 Commonly searched
Shipping
Returns & Refunds
Contact Us
About Us