When Glo Pals get placed in water, you'll see just how bright they are - they'll glow and instantly come to life! Each Pal typically lasts for 4+ weeks on average and each pack comes with four  Pals inside.

HOW TO CARE FOR YOUR GLO PALS:
Remove Glo Pals Light-Up Cubes from liquid. Blow through small slots in the side of each Cube. Store in a dry location for longer battery life.

WARNING: Choking hazard. Small parts. Not for children under 3 years.

My girls LOVE Glo Pals! It has been a fun, unique addition to baths as opposed to more cups and squirt toys. I just wish they lasted longer.

My twins love these little glo pals. I like that the little face shows up when the light bounces off of an object or bubbles. The light does diminish over time, but they are still working 3.5m after we first opened them. These would make a great gift or party favor. 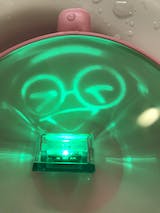 I got the red ones and they are amazing. I will definitely get the other colors once they are back in stock!